You’ll find an enormous number of Virtual Private Network (VPN) services available for the Amazon Firestick and Fire TV Cube if searching online or in the Amazon App Store. The best VPN for Firestick 4K and Fire TV Stick weren’t at all obvious to me until running trials of my own with several of the most popular.

I think you’ll agree with my choice of VPN services best for Fire TV Stick users once you see the test results.

Why Use VPN on Firestick 4K and Fire TV Stick?

An encrypted VPN hides you from online surveillance. The prying eyes of your Internet service provider (ISP), corporate and government agencies, school network administrators, and other hackers intent on invading your privacy will see nothing but noise when they attempt to spy on you. Securing privacy online is only possible with an encrypted VPN tunnel providing an anonymous connection to the Internet.

Searching for the ideal Fire TV Stick and Firestick 4K VPN that met all my requirements took several months, but I think you’ll agree with my new findings.

Here are my Firestick VPN requirements…

What Features Do Best VPNs For Firestick Have?

I had to recruit some of the My True Media staff and their FireOS devices to help test all the VPNs for Fire Stick that my initial services research dug up. Both Y-IT and Samamama were especially great assets during the months spent running my battery of tests and compiling information on all the most popular VPN services.

With most of these VPNs offering limited free trial periods or money-back guarantees, this testing had to be done in a fast, efficient, and organized way.

Even with good competition in some areas, the Surfshark VPN offer repeatedly proved to be the best one when I compared all the above-listed requirements.

The competition wasn’t even close when comparing other features, such as unblocking geo-restricted streaming services, including Disney+, Amazon Prime Video, Netflix, Hulu, and HotStar.

A VPN provider occasionally offers comparable features to Surfshark VPN. However, in my experience, none meets every criteria like Surfshark VPN does, especially at their price. In addition, the app developed by Surfshark VPN specifically for the Amazon Firestick doesn’t play around with your privacy.

With a very affordable price and powerful feature set, the Firestick 4K from Amazon has become the most popular streaming device in the world.

The huge selection of free streaming apps available for the Firestick also plays a big part in its massive success. Whether you want to unblock and watch free IPTV channel content or an on-demand TV show or feature film, the Firestick delivers the best. Apps such as Cinema HD, UnlockMyTV, and CatMouse provide endless free streaming entertainment for millions of cord-cutters around the globe.

Most cord cutters prefer to use free Firestick apps to stream video content… but not advertise it. This goes back to the fact that using the best VPN for Fire Stick makes your location and activities online invisible—even to your WAN administrator or ISP. If you do not protect your privacy with military-grade encryption, your identity, location, and actions are monitored and logged.

More and more every day, the laws in most countries, especially the USA and UK, benefit corporate interests rather than individual citizens. In many countries, lawmakers have recently given ISPs the legal right to access, record, and sell data about online activities when their customers connect.

This is one of many reasons to install Surfshark VPN. Their AES 256 bit encryption protects all your Internet devices when installed.

Even with a top VPN protecting your device, there may be a decrease in Internet speeds. That’s the nature of routing your traffic through VPNs—an extra server. The VPN app being used can also cause a slow-down due to computing resources such as how speedy your processor and memory are.

While most people online are lured by things advertised as new or free, download speeds and secure encryption were the most important criteria in our testing for a VPN to be used when we connect a Firestick device. With our streams on the line, excessive buffering from bandwidth throttling and dropouts is not acceptable. Even when only using Hulu, Disney+, or Netflix, your streams should be smooth.

Many of the best VPNs tested for Firestick, even some of the top contenders mentioned above, lease their VPN servers from third parties. Unfortunately, this often means you risk network bottlenecks and slow streaming speeds on a Fire Stick.

Surfshark VPN is one of very few VPN service providers that own and operate all their VPN servers and other network resources. This provides the fastest connection speeds possible. In addition, the app and server combination from Surfshark VPN had the least buffering (very important!) when streaming movies and TV show content—especially with live news and sports.

This fact, along with their reliable, easy-to-use Fire TV Stick application that just works, is why Surfshark VPN is our choice of the best app for Amazon Fire Stick to install for secure streaming activity. Even when using the best VPNs to connect a Firestick device online, you still get bandwidth throttling. So you need the premium security of the specialized Amazon Fire Stick Surfshark VPN app to unblock and experience unlimited stream activity.

Surfshark VPN has over Surfshark VPN dedicated IP addresses on 3200+ privately owned servers located in over 65 countries around the world. This places Surfshark VPN as the undisputed king when it comes to VPN download and streaming speeds and uncensored access.

No Logging or Tracking Your Internet Activities

Surfshark VPN has a strict no-logging policy; this includes both traffic and connection logs. Unlike many of their top competitors, Surfshark VPN never track or record any information about your VPN sessions.

When using Surfshark VPN, your browsing history, streaming services, download info, favorite shows, personal address, and even your country remain your own to know. Never will they keep a record of your connection information

Neither will they impose monthly data caps or data allowance. Enjoy unlimited bandwidth.

While there are many free VPNs available, we began our testing method with a few of them thrown into the mix. But, unfortunately, this is where all free VPNs fall flat.

Most free Firestick VPNs must gather your data and other info to sell in bulk to keep their VPN servers running. So-called free VPNs make a lot of money doing this. The ones that don’t are doing far less scrupulous things with your use of their apps and servers. 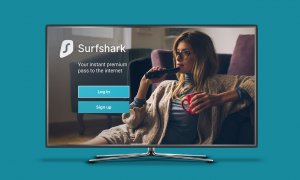 Most secure VPNs that work to hide your Firestick require you to side-load their free Android APK file to install them. This Android retrofit isn’t difficult, as you can see in our CatMouse installation guide and many other great Firestick app articles, but it does relegate the top Firestick to second class citizen.

Surfshark VPN made it easy to understand and use encryption apps, especially for Amazon Fire TV and Firestick stream access. They didn’t just retrofit an Android app for installation.

They then placed that premium app on Amazon, making their VPN installation super easy. Type “Surfshark VPN” in the App Store search to download the fastest streaming VPN for Fire devices.

1st Gen Firestick Notice: No VPN applications work on a first-generation Fire TV Stick due to the processor being used in that model—not even Surfshark VPN. The first-gen Firestick cannot have apps running in the background. VPN apps must run in the background to connect and work while doing other stuff (like stream movies!). First-gen Firesticks must access networks through a VPN-protected router to stream safely. If you bought your Firestick in 2017 or later, a VPN app should work just fine on your device. Amazon discontinued the first-generation models in late 2016.

The Surfshark VPN app for Firestick works perfectly with the Amazon Fire TV remote. Choose your VPN service wisely; many Android apps available were made for Android tablets and smartphones and require touch screens to use them properly.

Use VPN On unlimited Devices at Once Including Firestick

With one account, you can protect an unlimited number of devices by connecting to the Internet securely through Surfshark VPN.

I highly recommend that you protect your entire home network with Surfshark VPN. It’s also smart to protect all your connected devices on the go. Nobody should ever use public connections without VPN protections in place.

I recommend the Surfshark VPN support team as some of the best in the business. They know their stuff when it comes to security online. They’re patient, friendly, and straightforward to understand.

Available all day, every day, you can easily ask anything of Surfshark VPN support staff anytime via their site chat. This is available on every page of their website.

Ask them about their 30-day money-back guarantee. If, for any reason, you don’t believe Surfshark VPN is the best VPN for your Amazon Fire TV Stick, they will cancel your order and refund every cent at that time. Even if you don’t have a reason and just want your money back, they will refund all of it.

🔓 Do you need a VPN on Firestick?

The Amazon Firestick doesn’t require a VPN, though privacy only exists when using one. When your Firestick is jailbroken, streaming through the Surfshark VPN app is highly recommended.

Third-party free movie and TV show apps for Firestick are typically the work of disenfranchised Fire Stick app developers. Many collect your streaming habits and other details for their benefit. Of course, many so-called best free VPNs do the same to pay for their servers.

Streaming with these Amazon Fire Stick apps is also monitored by your ISP, government agencies, and several corporate watchdog groups. Unfortunately, privacy laws are rarely made for your benefit.

Get the best explanation in our free VPN guide, but when you connect to content and stream or download using free VPN on a jailbroken Fire Stick device (or any devices), it’s bad for privacy.

A great way to test and enjoy all the best VPN services with your online device for free is to connect with these Amazon Fire Stick trial offers for VPN apps. Surfshark VPN, ExpressVPN, NordVPN, and IPVanish VPN each offer 30 days to try them for free.

💰 How much do VPN services cost?

For as little as $2.49 per month, your Fire Stick data, location, identity, and activities are private. Download and install the Surfshark VPN app. Try it free with their 30-day money-back guarantee.

Their specialized Amazon Fire TV Stick app is the most economical I’ve found of all Fire Stick VPNs. Download, install and connect to content with great streaming device security features. To connect using a secure jailbroken Amazon Fire TV Stick device, this is one cheap download.

To access Netflix services content on Amazon Fire TV Stick devices from any location, you need to get a VPN service that can keep up with the Netflix blockade against VPNs. In our VPN for Netflix server access tests, the Surfshark VPN app and specialized blockade-busting servers connect most reliably. Download the Surfshark VPN app for Firestick and try it free for 30 days. Get all Netflix streaming content unblocked through their special setup of VPN server locations.

Contact their friendly, knowledgeable 24/7 live chat support team or email them if having any trouble. They know which Firestick settings currently work best and which server location will unblock access to Netflix, HotStar, Hulu, or any other geo-restricted streaming content service location.

I think you’re going to be happy with the Surfshark VPN price and speed along with all the other benefits of keeping your location, identity, data, and habits private. You’ll soon be streaming movies, TV shows, and even sports events, which is the only smart and safe way to do so. Tell them Alice on Fire said “Hi” and…